A set of eleven paintings of steelworks around the UK made 100 years ago shed light not only on the technology of the times, but also the working conditions and social relationships between workers. These paintings by British artist Herbert Finn were originally commissioned for a trade union banner and offer a snapshot of the UK steel industry a century ago as it emerged from the First World War. The paintings have been published as The Banner of the Steel Workers Union in celebration of a longstanding Newcomen member, Dr Jake Almond. Jonathan Aylen explains the technical background.

These paintings of steelmaking processes were completed on a tour of British works during 1920 by the artist Herbert J Finn (1860 – 1942). He went on to paint seven large trade union banners on silk, with vignettes of his pictures – one for each Division of the Iron and Steel Trades Confederation Union. The banner for the North West Division of the ISTC is in the collection of the People’s History Museum in Manchester, that for the North East Division in the Dorman Museum, Middlesbrough and the South Wales and Monmouthshire banner is in Newport Museum and Art Gallery, Gwent. 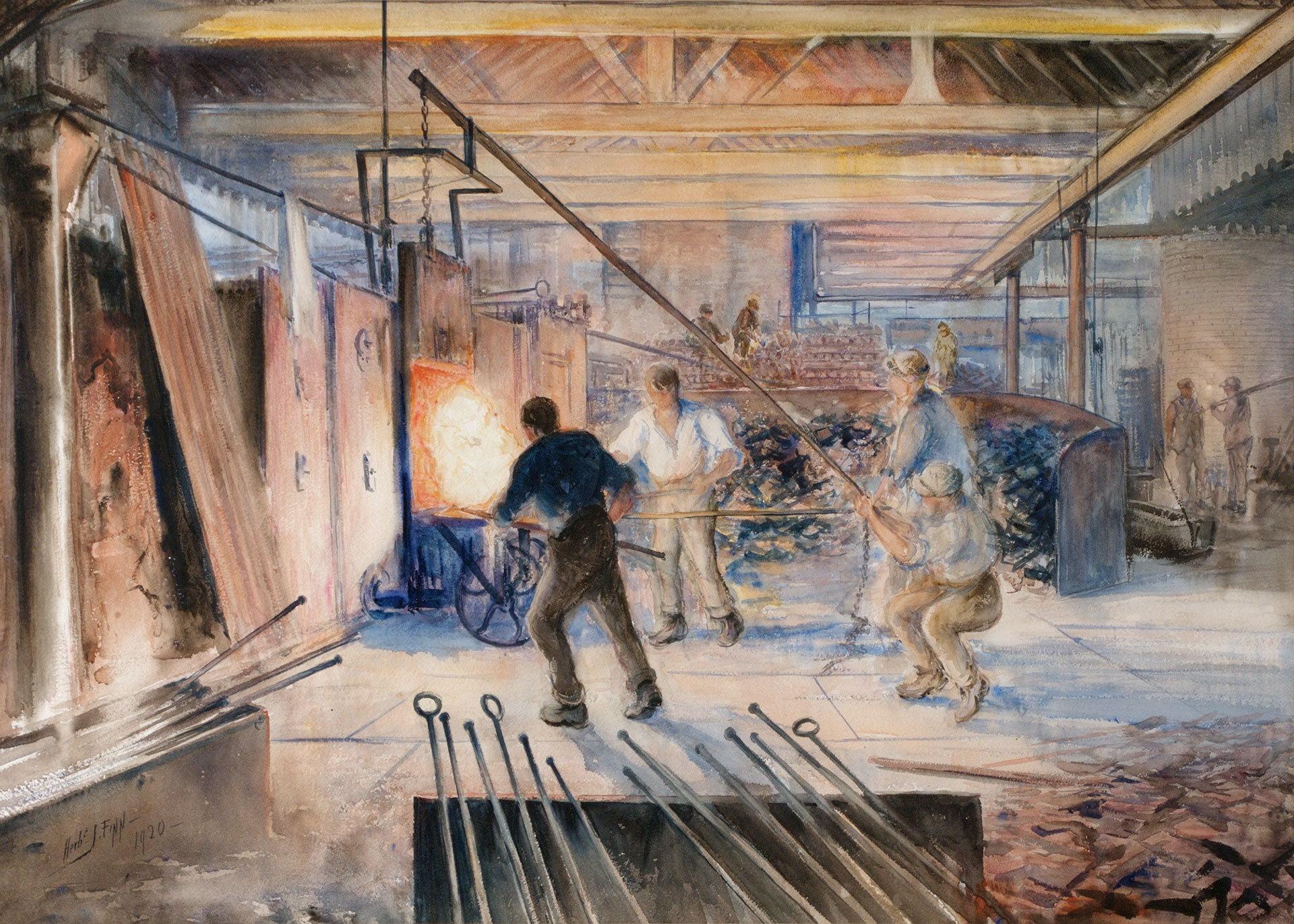 The paintings provide a snapshot of the iron and steel industry in Britain a century ago. They include wrought iron puddling and the production of steel by the crucible method, both then in decline. They also show the latest blast furnaces and open-hearth furnace plants together with a powerful open-die forging press. The paintings depict the arduous working conditions that existed at that time. The watercolours contain small details which might surprise.

Finn’s painting of a tinplate works not only shows technical detail, but offers a run-down of the social structure of the workforce. It also shows the working methods of the artist.

The painting shows a small tinplate works, almost certainly in South Wales, or perhaps Gloucestershire next door.  The hangers for dipping packs of tinplate for cleaning in hot sulphuric acid can be seen in the tin-house to the right of the picture. The three rolling mill stands all rotate in one direction. A big flywheel is needed to maintain the momentum of a mill when a hot sheet of steel bites into the roll gap. Lydney tinplate works had a sixty-ton flywheel, for example. More stands would demand an even heavier flywheel.

As the mill rolled only in one direction, it was necessary to hand the hot rolled sheet back over the top roll before it could be sent through the rolling stand again for another pass. 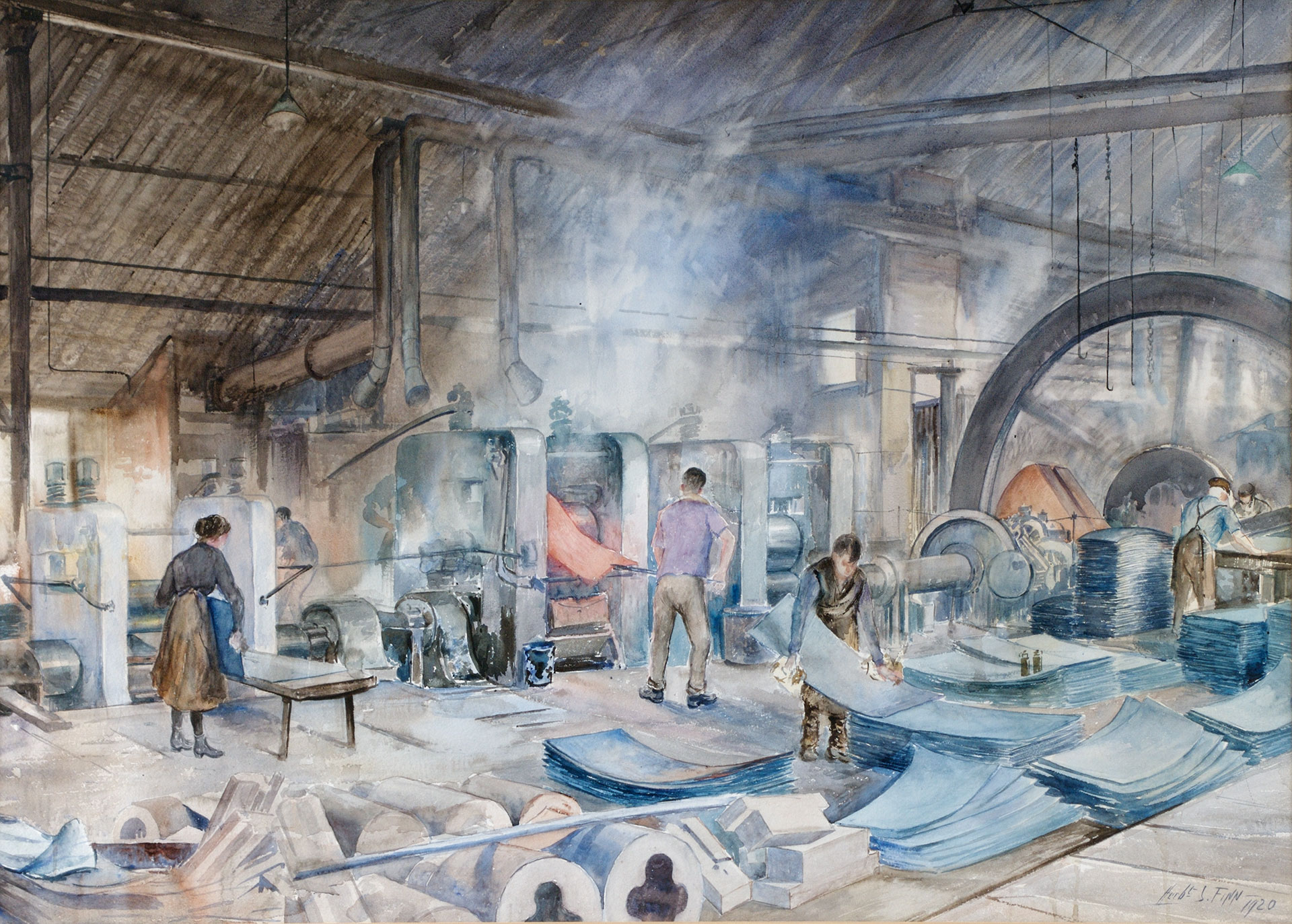 The line of mills shown in Finn’s picture are steam powered via a drive shaft from a horizontal engine just out of the picture on the right – the polished steel connecting rod can just be seen. (Gas engines were sometimes used for lighter rolling duties such as the one running at Kelham Island Museum, Sheffield). Notice the spare wabbler boxes in the foreground of the painting with their cruciform openings. These mesh with the wabbler – the cross shaped end of the roll to form a simple flexible coupling between the drive shaft and the roll.

Typically, each set of mills had two stands for hot rolling as shown here – one for roughing the sheet and one for finishing. Tinplate was made from flat rectangular sheets, about three feet long, guillotined off longer sheet bars. As the individual sheets were hot rolled and got longer and thinner, they were “doubled” – folded over while hot to increase productivity in rolling – then doubled and doubled again to form a pack eight sheets thick.

Social Hierarchy of a Tinplate Mill

The centre of Finn’s picture shows the rollerman. He is receiving the hot sheet over the top of the two high mill from the catcher the other side. This looks like a long, first run “virgin” bar. The rollerman was in charge of the mill and was paid the most. His skill in judging thickness and size determined the output of the mill and the piece rates paid to his crew.

The catcher, or behinder, just visible on the opposite side of the mill was very much the junior. He had the arduous task of grasping the hot sheet with tongs as it came out of the back of the mill and swinging it over the top roll back to the rollerman. The man at the back of the picture may well be the doubler who folded and sheared the hot sheets with the help of his steel toe capped clogs. The doubler was second in command and would relieve the rollerman. The doubler worked closely with the furnace man who heated and reheated the steel sheets during the rolling process. The sheets soon cooled during rolling. All of the crew would have the support of a first helper, a time served man who would rotate through the various tasks to learn the job.

Notice the primitive manual screw down to control the roll gap. The can beside the stand no doubt contains grease for regular lubrication of the hot brass neck bearings. The hot grease would splash onto the workers. There is elementary fume extraction equipment and chimneys from two reheat furnaces at the back of the mill shed.

There is a woman working here on the left of the picture, feeding sheets into the two high cold mill for polishing to improve the surface quality prior to tinning. This suggests a degree of artistic licence. The presence of a woman worker is not in doubt. Rather, cold mills for tin plate were usually separate from hot rolling. Polishing the surface required little power as there was no reduction in thickness. So a low power steam engine drive was sufficient. Perhaps the artist was keen to show every stage of the tinplate manufacturing process in one picture and has moved the cold rolling process from another bay to complete the picture. The woman or boy in the foreground of the picture with well-protected hands is an opener – responsible for separating the rolled packs back into individual sheets after hot rolling.

All this hand rolling of individual sheets began to disappear with the installation of the first continuous wide strip mill in the UK at Ebbw Vale in 1938 by Richard Thomas & Co., although it was to take two decades before the last hand mills finally closed.

For further explanation of the above tin plating process and the individual roles please see the Ashburnham Tinplate Works website. See also photographs from Trostre Cottage Museum for further images of tinplate works. 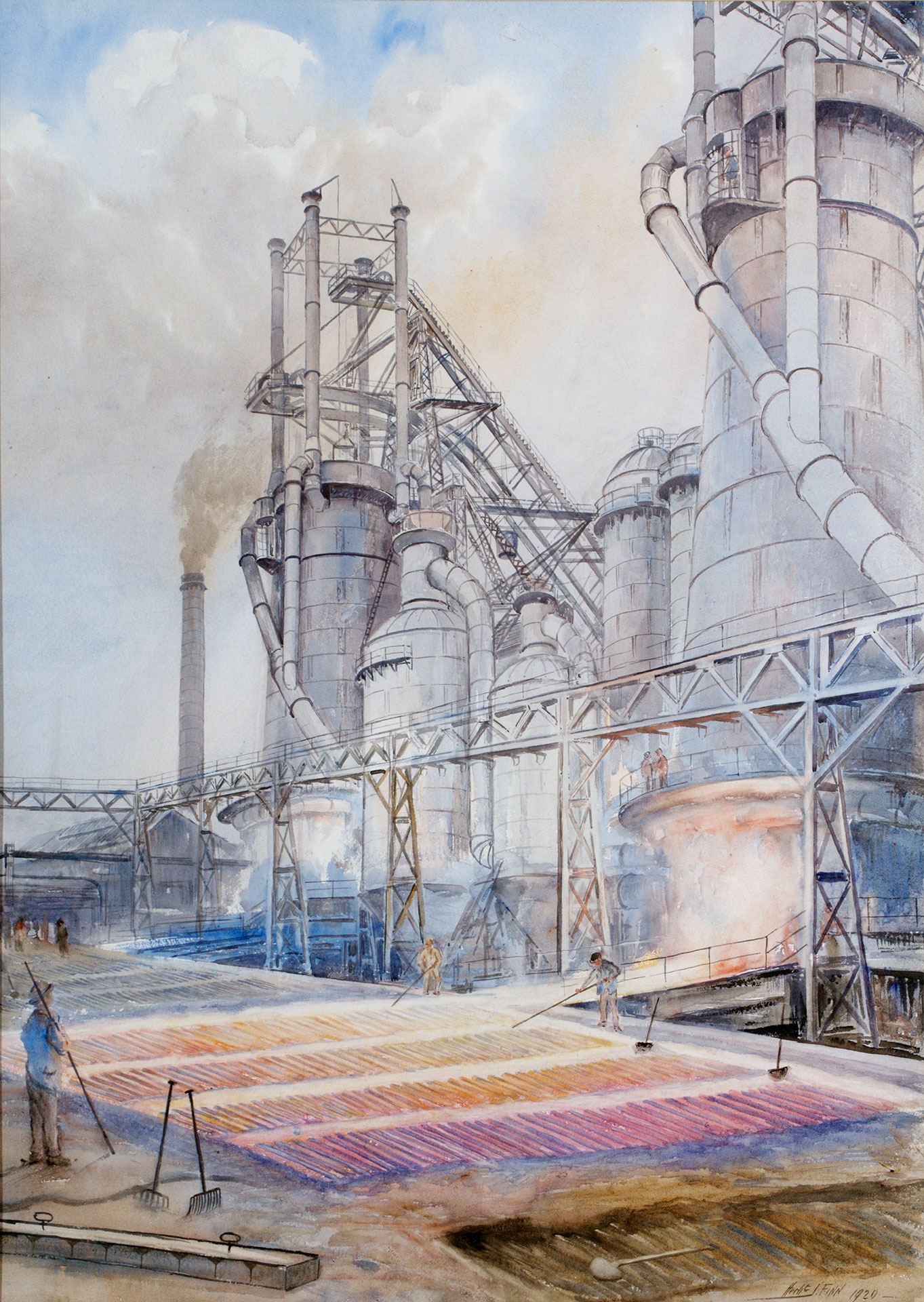 Finn’s painting of an ironworks shows molten iron from a blast furnace being tapped into pig beds of sand to solidify.  The resulting pig iron would be sold to iron foundries or to steelworks using cold charge open hearth furnaces. Both blast furnaces have mechanical charging for iron ore, coke and limestone apparently using an inclined hoist with a merry go round system of baskets. But it is not clear what sort of top is used for distributing the burden at the head of the furnace. The nearest blast furnaces has relatively modern looking single combustion chamber cowper hot blast stoves. Similar scenes can still be seen in Europe at pig iron plants such as DK Roheisen und Recycling in Duisburg, although they use a pig casting machine rather than sand beds for casting. 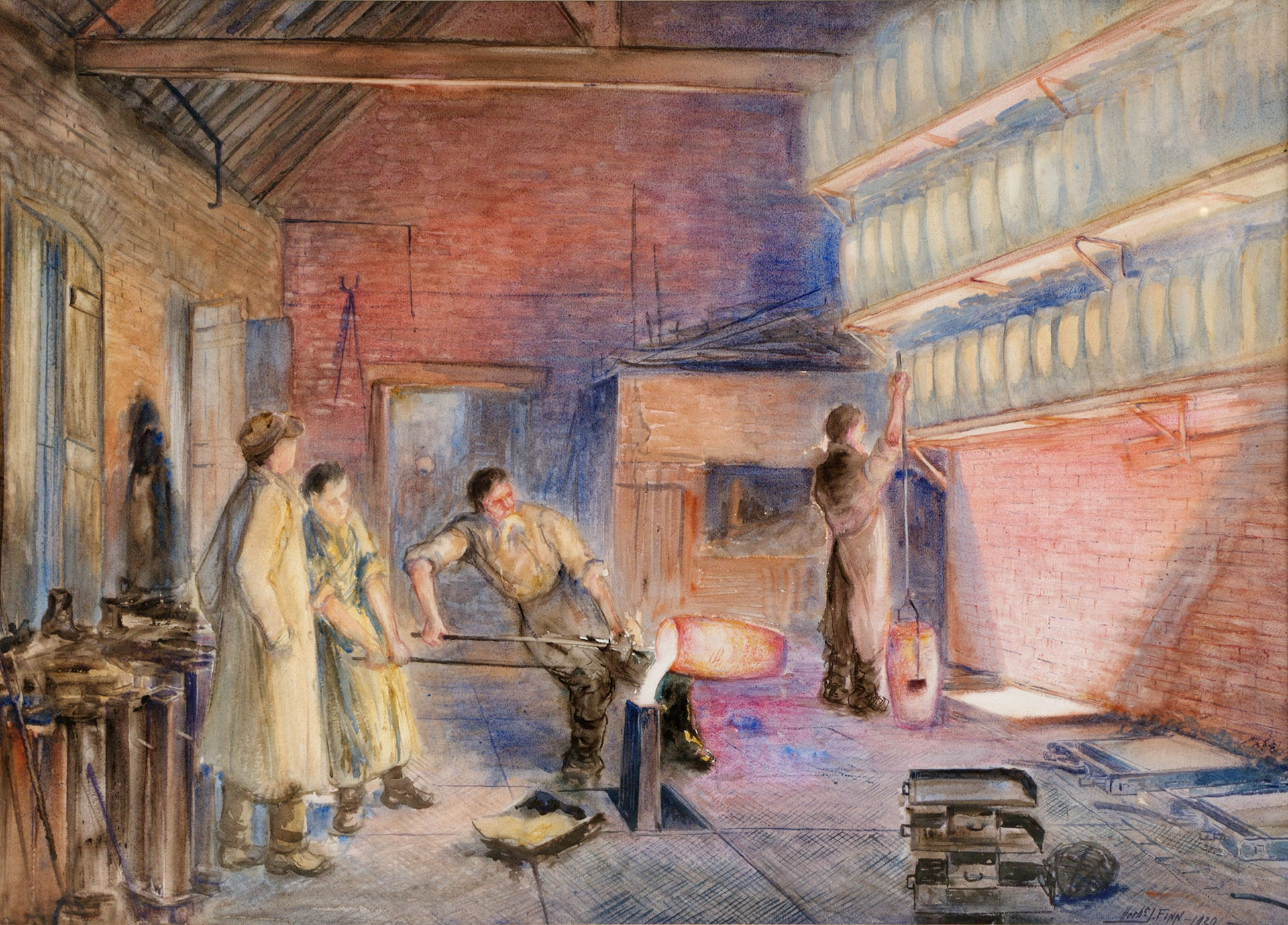 Crucible steelmaking was prevalent around Sheffield. The picture of crucible steelmaking shows one pot of molten steel being teemed into a mould with a second lifted out of the furnace hole ready for pouring, probably into the same mould. The ceramic pots are being dried on racks above the furnaces ready to be filled with small scraps of iron and some carbon before being sealed with a lid and placed in the melting furnace below. The best known surviving site for crucible steelmaking is Abbeydale Industrial Hamlet, in Sheffield but a much larger site survives in Darnall, Sheffield which was brought back into use during the Second World War. 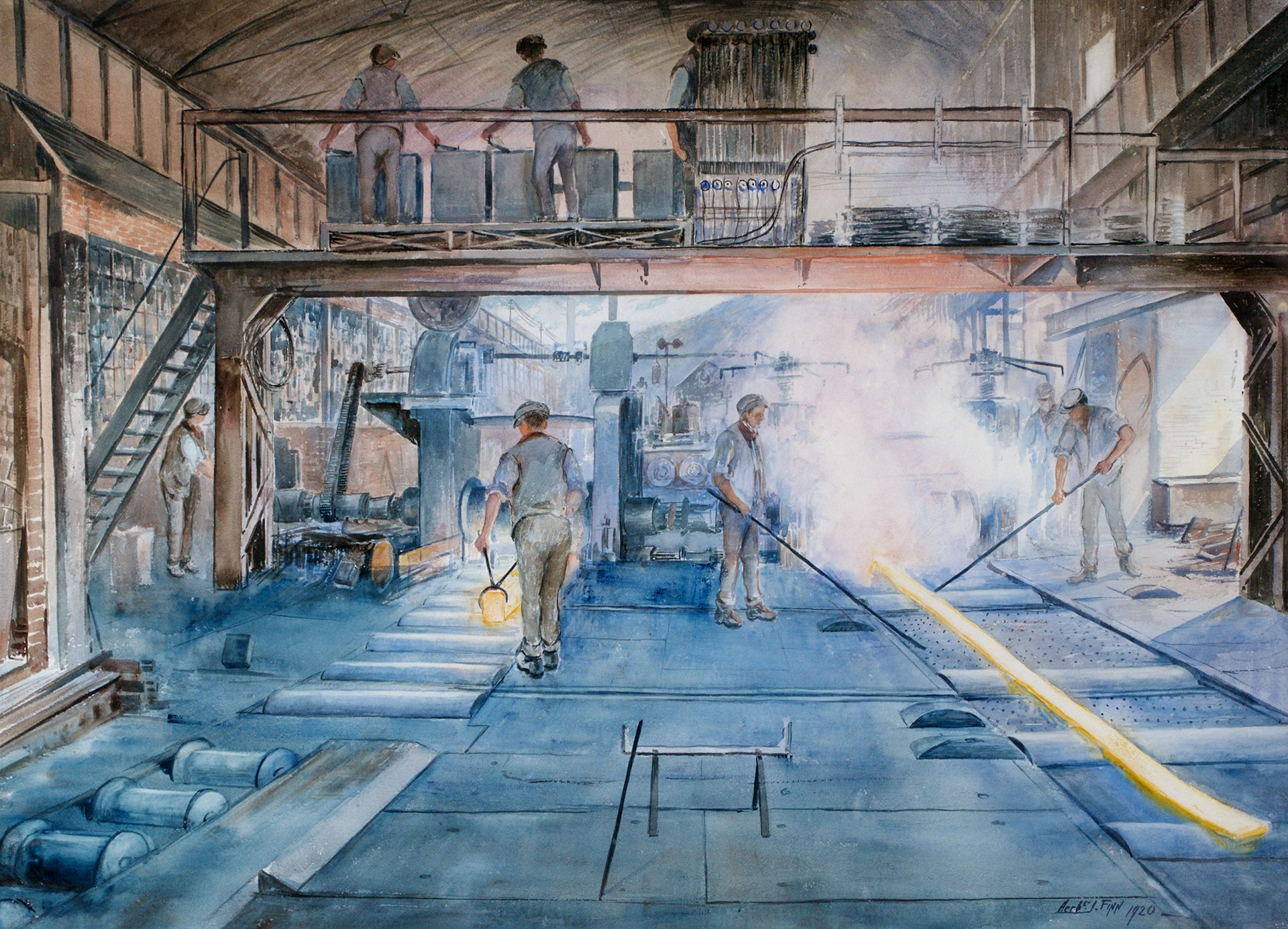 Finn’s painting of a cross country rolling mill looks conventional at first sight. But notice the electrical switchgear on the platform above the mill. The rollermen on the platform are regulating the speed of the two mill stands and reversing the flow of material on the roller tables and through the mill using electrical controls. This is a pioneer electrically driven mill in 1920. Frustratingly, we see nothing of the electric motor or the incoming power supply. Nor has it been possible to identify this particular mill. There is a chain driven screw down on the billet mill to the left. The rollermen standing on the run-out tables are there to turn and guide the hot material through the next pass line.

The Cleveland Industrial Archaeology Society became involved in the project to publish the paintings of Herbert Finn as a result of Jake Almond’s interest in the paintings when they were exhibited at the Kirkleatham Museum in 2007. Jake was a long-standing member of the Newcomen Society and a stalwart of the Cleveland Industrial Archaeology Society. Jake made arrangements to have Finn’s water colours professionally photographed. Following Jake’s death in 2018, the book was an appropriate way to acknowledge his massive contribution to Industrial Archaeology on Teesside and as a reminder, lest we forget, of the contribution that the workers in the iron and steel industry made to its success, often at risk of their lives.

The Banner of the Steel Workers Union

The original water colour paintings were photographed whilst on display at Kirkleatham Museum in 2007, where they had been loaned by the trades union ‘Community’– the new name for the ISTC.

The book The Banner of the Steel Workers Union is 29cm x 21cm, 32 pages with 11 colour plates of the paintings and includes a memorial to Jake Almond with a list of his publications and a brief history of the artist. A limited number of copies of the book are available from:

Price £10.00 including postage within the UK.

The CIAS acknowledge the support of the Community Union in allowing these watercolours to be photographed. The author Jonathan Aylen is responsible for the commentary here.