Newcomen is named after Thomas Newcomen who invented the first practical working steam engine in 1712, which led to the great industrial and technological achievements of the modern age. An original early Newcomen engine dating from about 1725 is housed in Dartmouth his birthplace.

The Society was founded in 1920 and its charitable objectives are to promote, encourage and co-ordinate the study of the history of engineering and technology from ancient times to the present day. It disseminates historical information through its publications, lectures, archive conferences and site visits. Its diverse membership reflects the breadth and scope of the history of engineering. Members receive a range of benefits and non-members may search the archive and pay to download articles.

Plans to celebrate the Society’s centenary in 2020 are underway of its founding. The Newcomen Society continues to publish scholarly papers on an extensive range of subjects. These papers, from 1920 onwards, can be accessed in the on-line archive. Subjects include:

JOIN NOW FOR FULL ARCHIVE ACCESS AND OTHER MEMBER BENEFITS

The Society supports the collection and preservation of archival material and historical artefacts but it does not organise or run campaigns for the conservation of buildings, artefacts or equipment.

From time to time, and taking into account its limited financial and personnel resources, the Society may provide advice on conservation campaigns, mainly by directing campaigners to sources of information and/or support. The Society may also, on provision of appropriate information and arguments, be willing to write letters of support for certain campaigns and to bring them to the attention of its members via this website. The Society is not normally able to provide financial support for conservation projects or campaigns.

Requests for advice, information or other non-financial support, should be sent to The Administrator via office@newcomen.com

These bi-annual lectures are organised by the Society in memory of the late Henry Winram Dickinson, D Eng, MIMechE – a founder member of the Newcomen Society who was its Secretary from 1920 to 1951, except for the years 1932 to 34 when he was President. He was also Editor of the Society’s International Journal (then called Transactions), from the first volume in1920 until a few months before his death. He was also author of more than 30 papers published in the Journal and available in the archive. For further information please visit the Dickinson Memorial Lecture page.

Bi-annual lectures are organised by the Society in memory of the late Henry Winram Dickinson, D Eng, MIMechE – a founder member of the Newcomen Society who was its Secretary from 1920 to 1951, except for the years 1932 to 34 when he was President. He was also Editor of the Society’s International Journal (then called Transactions), from the first volume in1920 until a few months before his death. He was also author of more than 30 papers published in the Journal.

For further information please visit the Dickinson Memorial Lecture page on this website.

Thomas Newcomen was the inventor of the first practicable atmospheric steam pumping engine, the Newcomen engine. This was to have a profound effect on the ability to mine from greater depths, thus assisting the dawning industrial revolution.

Newcomen was born in Dartmouth, Devon in 1664, a devout Baptist. He worked as an ironmonger – and so described himself throughout his life. He not only sold items but fabricated parts himself from metal. Through this he became familiar with the mines of Devon and Cornwall where he noted the difficulty and expense of removing water from the mines.

Another Devonian, Captain Thomas Savery, had invented a pump in about 1698, and took out a broadly-worded patent for “raising water and imparting motion to all sorts of mill-work by the impellant force of fire”. The device relied upon vacuum and atmospheric pressure to raise water from below, and upon high-pressure steam to force this water to the surface of the mine. It was not a success when used in mines, there were difficulties in construction due to the limits of current technology, but the patent created problems later for Newcomen.

There is no known image of Thomas Newcomen, but the location of his house and workshop are known and are commemorated by plaques in Dartmouth. He worked for many years on his invention, and achieved success in about 1710 with the construction of the world’s first reciprocating steam engine. This also relied on a vacuum but was a great advance over Savery’s pump, and made no undue demands on the technology then available.

This item was written by Past President John Allen who has made the study of Newcomen his life’s work.

The Newcomen Logo and its Origins

In 1923 Loughnan Pendred, one of the founder members and second President of the Society, introduced the idea of an emblem. It was decided to use the heraldic design of a griffin, signifying vigilance, a necessary attribute of the engineer.  The griffin is facing backwards but going forward, echoing the Latin motto, ‘Actorum memores simul affectamus agenda’, which means ‘We look backward while going forward’, signifying the historical interests of the Society. It was designed by Alec Buckles of the Royal College of Art in the form of a woodcut measuring approximately 2 inches by 3 inches and was first used in Transactions in 1923. 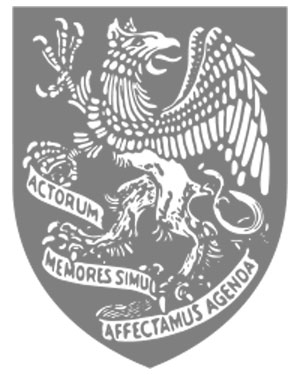