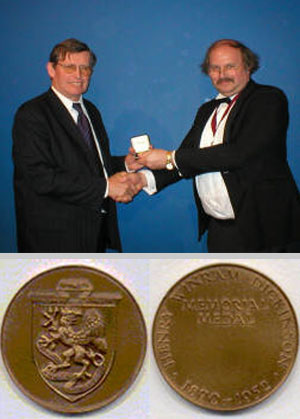 The Dickinson Memorial Lectures are a series of lectures organised once every two years that . . .

The first of the series of Memorial Lectures to commemorate the life and work of the late Henry Winram Dickinson, D Eng, MIMechE, was delivered on 12th May 1954 at the Science Museum in London by Professor Charles Singer. H W Dickinson had been a founder member of the Newcomen Society, and was its Secretary from 1920 until 1951, except for the years 1932-34 when he was President. He was also Editor of the Society’s Transactions (now known as The Journal) from the first volume on 1920 until a few months before his death. He was author of more than 30 papers in Transactions.

Dr Dickinson was born in 1870 and served an apprenticeship at Park Head Steelworks in Glasgow, joining the staff of the South Kensington Museum in 1895, and rising to the position of Keeper of the Mechanical Engineering Department of the Science Museum 1924-1930. In 1939 he received from Lehigh University in the US the honorary degree of D Eng; he was presented with a gavel (now used by the Society) made from the ancient Lehigh oak.

When the Newcomen Society was founded in 1920 its success and continued existence was due in the main to his enthusiasm – an enthusiasm which inspired others to give of their best – and no-one had done as much as he to prosper its work. Having a wide range of interests himself, he was able to appreciate the enthusiasms of many specialists and to instil in them a sense of proportion, an appreciation of the history of engineering and technology as a whole, and an abiding interest in the surrounding aspects.

The Society is honoured to have entertained some notable speakers over the years and a record of past Dickinson Memorial Lectures is listed below: