The steam tug ‘Daniel Adamson’ and the Llangollen Railway

Bob Gwynne explains the many links between ‘The Danny’ and the Llangollen Railway – two heritage projects threatened by lockdown.

Heritage at a Social Distance

‘Lockdown’ has produced a world where the everyday, like taking a bus ride, going to the park or shopping, has become an adventure. An unseen menace is out there turning the world upside down and shredding the economic ‘certainties’ of recent decades. How Britain comes out of this is currently a source of much debate, but it is clear that discretionary spend by say, visiting a coffee shop, the theatre, or a stately home, is having to be rethought.

A part of this world is the industrial heritage sector whose sites are often narrow and restricted – awkward in the new world of ‘social distancing’. Industrial Heritage in the UK are often sites (and sights) created out of passion and interest, but often with little thought for the future, and largely funded by income from donations or admissions & fares.

A number of groupings (akin to ‘trade bodies’) try to coordinate these idiosyncratic organisations, The Heritage Alliance being the largest. Then there’s the Association of Independent Museums, a grouping site, independent of local or national government (and therefore generally in existence through their own approach to fund raising). Maritime Heritage has a government supported body in National Historic Ships UK, though it is then up to individual groups and trusts who own and run the ships.

The ‘preserved railways’ have the Heritage Railway Association (HRA), a grouping of over 130 railways responsible for over 450 stations and 550 miles of track. Railway work is often safety critical, so the HRA is on hand with guidance to managers who run networks, and to ensure that the work of the Railway Inspectorate is understood. All of these organisations (and particularly the steam railways) are propped up by a volunteer army, of mostly people in retirement.

Clinging On For a Post-Lockdown World

Heritage railways have perhaps the highest profile when it comes to working industrial history, athough there are many other examples. In recent years lottery funding has helped many industrial heritage attractions with capital spend, and recently with a focus on ‘resilience’, but that doesn’t help with revenue. So, back to the fact that without visitors, how do transport, industrial, literary, or maritime museums keep going?

It is easy to forget that this does actually matter. According to a recent report, tourism in the UK accounts for 9% of GDP and 11% of jobs (Deloitte report ‘Tourism: Jobs and Growth’ 2013) and a quick look at the heritage railways reveals just how much this sector is part of the story. For instance, The North Yorkshire Moors Railway has over 350,000 passengers per year and contributes over £30 million p.a. to the local economy. The Ffestiniog Railway, now responsible for over 40 miles of narrow-gauge line, reckons lockdown will have cost them in the region of £2 million. North Wales’s standard gauge heritage railway, at Llangollen, now locks in over £5.8 million of tourism spend per annum to the local area.

Currently industrial museums, historic ships, heritage railways and similar sites are clinging on by a range of appeals and other measures in the hope that when Britain finally gets to the other side of the pandemic, people will return. It is to be hoped that this is the case, as they all provide a route into engineering history that is immediate, and of value, although this is not always obvious to the managers of ‘UK plc‘. 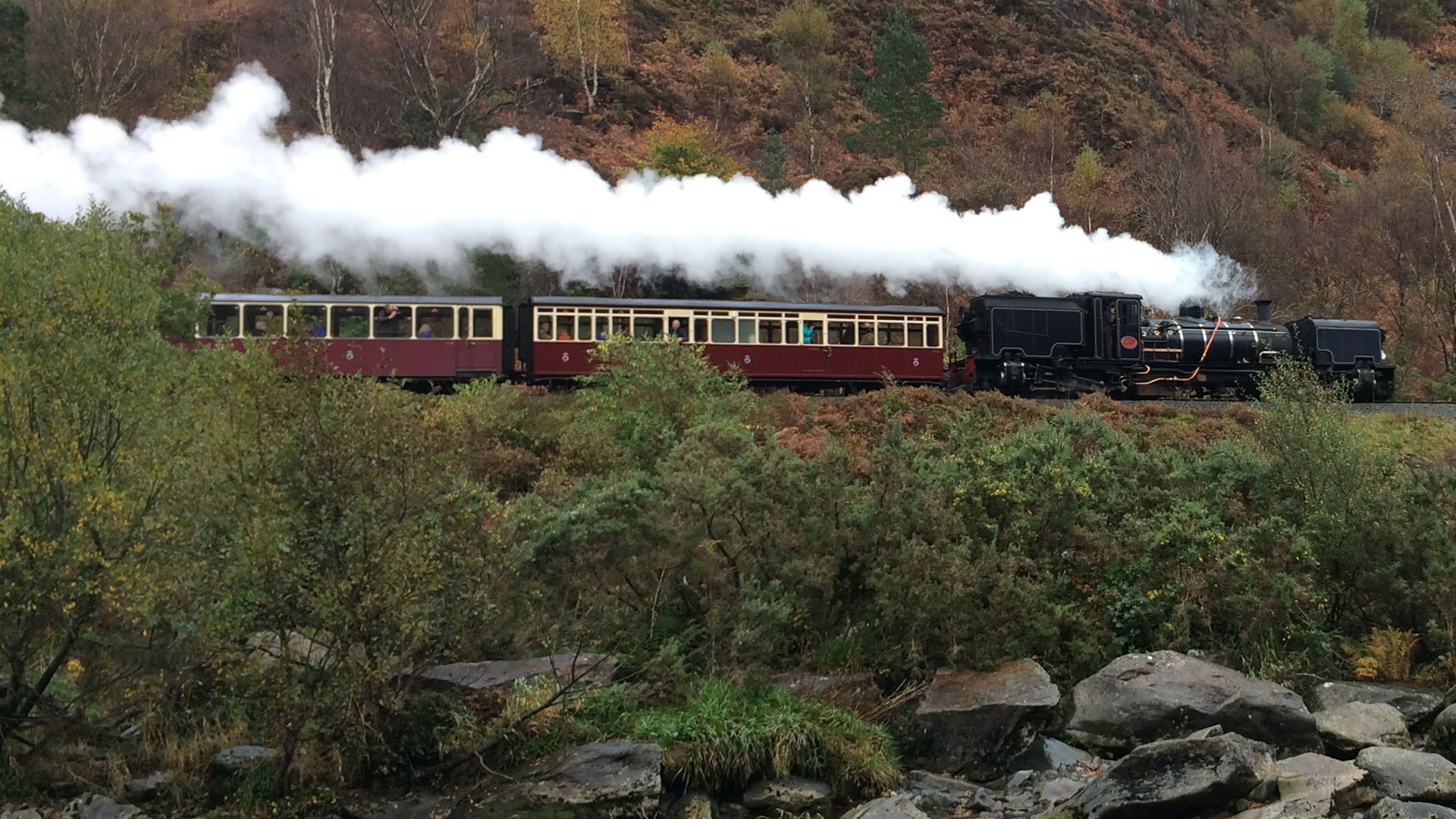 Engineering Links – The Danny and the Llangollen Railway

The links – both formal and informal – between industrial heritage and the wider community are part of the fabric of Britain, and two contrasting examples which provide a ‘ride’, and not just an engaging visit (and which are near neighbours) bear this out. The ‘Art Deco’ steam powered tugboat the Daniel Adamson (also known as The Danny – see main image above) and the Llangollen Railway have links in their story which illustrate why industrial heritage is an important part of the history of these Isles, and is worth protecting for the ‘post-lockdown’ world.

The Daniel Adamson was originally built in 1903 and first carried passengers in 2016. Friendly relations between the volunteers restoring the ship and the nearby Llangollen Railway saw the team responsible for The Danny’s engines visiting the railway for training. The ship’s engines are by John Jones and Sons of Liverpool, a company with a long history going back to the start of the Liverpool and Manchester Railway. The company had started out building locomotives, including Firefly for the Great Western Railway, so this arrangement seemed somewhat circular.

The Danny did its first public sailings in the same year that the Llangollen Railway finally reached the town of Corwen – the aim of the railway society from when it started rebuilding the line (closed and dismantled as part of the ‘Beeching era’ cuts) in 1975. Completion of the track to Corwen was just the start of a major volunteer project to build a new station there (the original station site not being accessible), complete with underpass, water tower and signal box, which should have opened this year.

Meanwhile the volunteer team running The Danny found a niche by running trips on the Weaver Navigation, a broad ‘canalised’ river, appropriate to the vessel. The Danny had been built for the Shropshire Union Railway and Canal Company (owned by the London and North Western Railway) to tow narrow boats from Liverpool to the Shropshire Union Canal entrance at Ellesmere Port. One of the main feeders for this canal is the Horseshoe Falls at Berwyn near Llangollen. 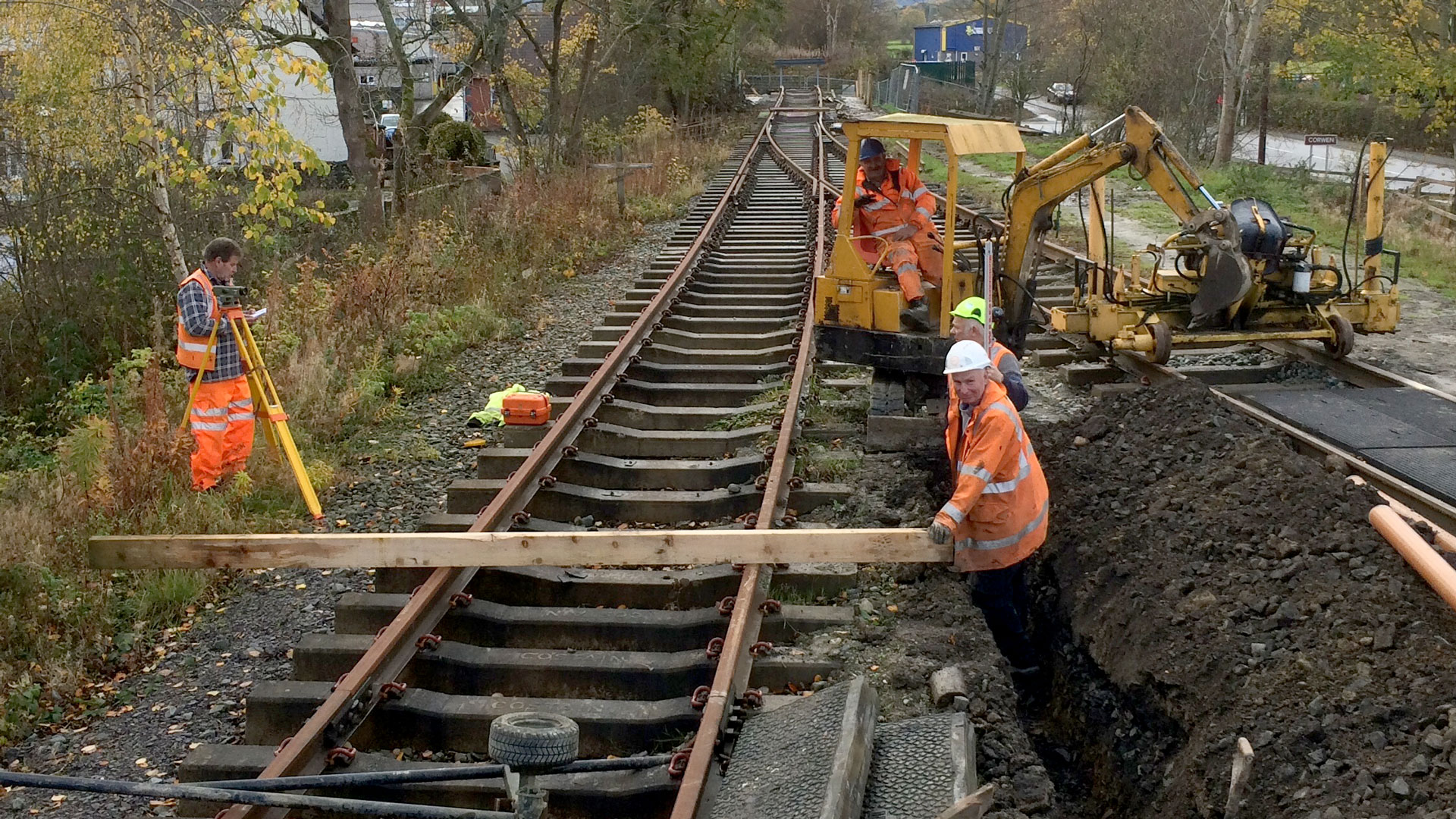 Which brings us back to The Danny, as in 1922 the ship (then named the Ralph Brocklebank) was sold to the Manchester Ship Canal Company and in 1936 renamed Daniel Adamson – after the founding father of the Manchester Ship Canal. The name change was accompanied by the fitting out of the vessel as the official Manchester Ship Canal Directors’ launch, complete with an interior produced by the same Liverpool furniture makers (a subsidiary of the Belfast shipbuilders Harland and Wolff) with experience of fitting out grand ocean liners. This is one of the unique selling points of this not so humble ‘tug’ – a fully restored Art Deco saloon once used to entertain the great and the good who might be useful to Britain’s largest ship canal.

Daniel Adamson himself was from Shildon in Co. Durham, where his father ran a passenger service on the Stockton and Darlington Railway (S&D). Adamson started his career apprenticed to Timothy Hackworth, the engineer who competed in the Rainhill trials and who kept the trains moving on the S&D. Adamson would go on to establish a successful boiler-makers in Manchester, the Frodingham Ironworks at Scunthorpe and the Manchester Ship Canal. The founding meeting for the Ship Canal was held at Adamson’s house, in 1882, attended by local politicians and industrialists. These included Richard Peacock of Beyer Peacock, locomotive manufacturers.

Peacock’ s business partners were Charles Beyer and Henry Robertson. Robertson was the engineer behind the railway that is now the Llangollen line and the restored railway includes two viaducts and a tunnel in which Robertson would have had a hand. 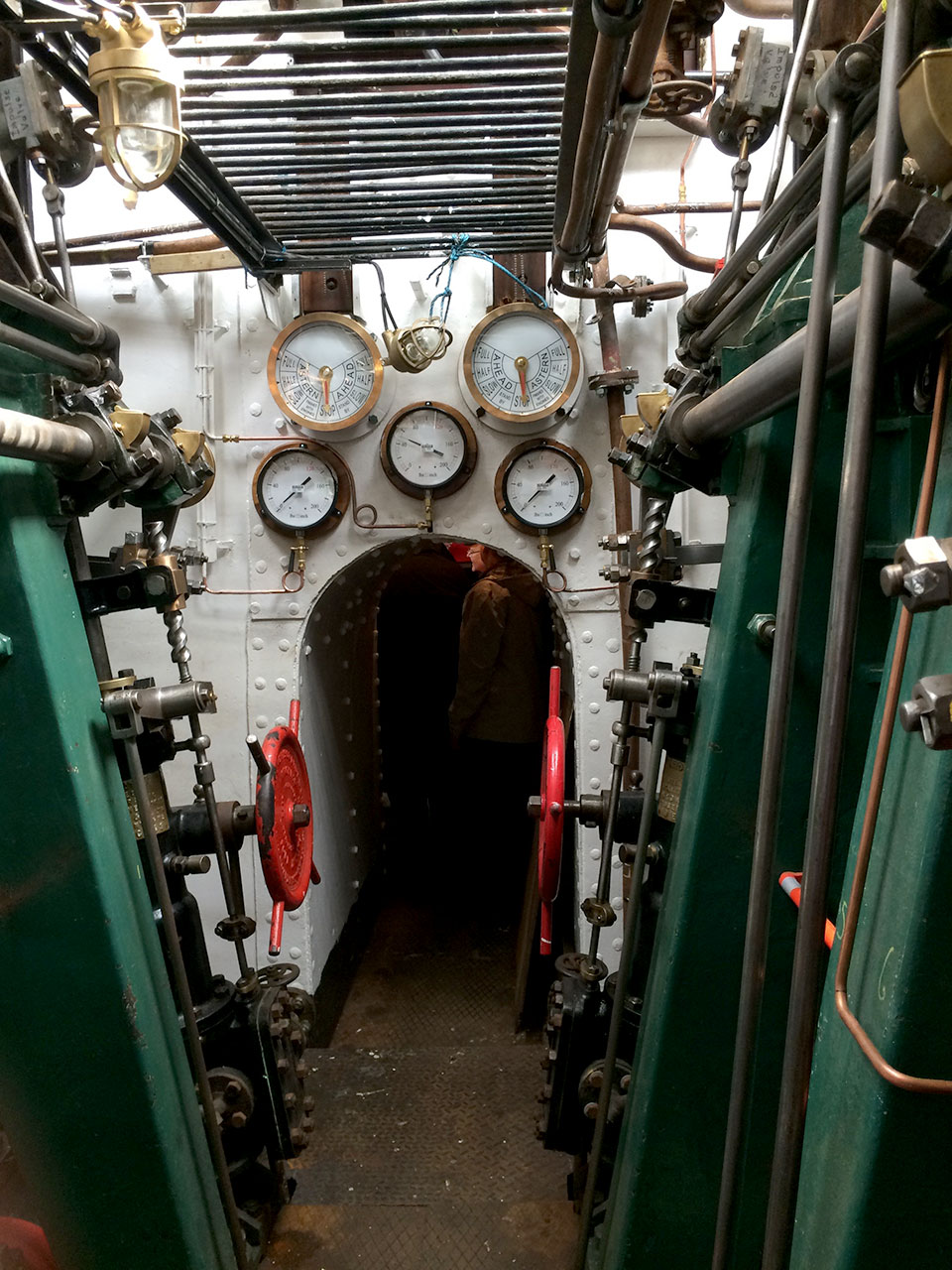 The Danny’s Engine Room
Not made for social distancing!

Beyer, who had been born in Saxony, chose in later life to live at Llantisilio Hall – a large house which can be seen from the Llangollen railway as it climbs towards Berwyn tunnel. His business partner, Robertson, had Pale Hall built (now a ‘country house hotel’) in 1871, just a little bit further up the line, beyond Corwen. Beyer is buried in the graveyard at Llantisilio church from where the heritage line’s trains can easily be heard, as can the Horseshoe Falls, the feeder for the Shropshire Union Canal.

The falls were a collaboration between the engineers Thomas Telford and William Jessop. They still feed the canal today which is open to navigation in part thanks to lobbying by the engineer Tom Rolt a founder of the Inland Waterways Association, and later, the founding father of railway preservation with his work on the Talyllyn Railway. A short walk from the ‘falls’ is Berwyn station, which would have been the local station for Beyer. The station, once listed by The Times columnist Simon Jenkins as one of the top ten most picturesque stations in Britain has the A5 running behind it. The A5 is Telford’s heavily engineered road to Holyhead, on which the young Thomas Brassey (who became railway contractor to the world) cut his teeth as surveyor.

All of this rich history can be threaded together in normal times by buying a ticket but Covid 19 has knocked that on the head, for now! As a result both operations can stand as a symbol of what is currently under threat as a result of the pandemic. 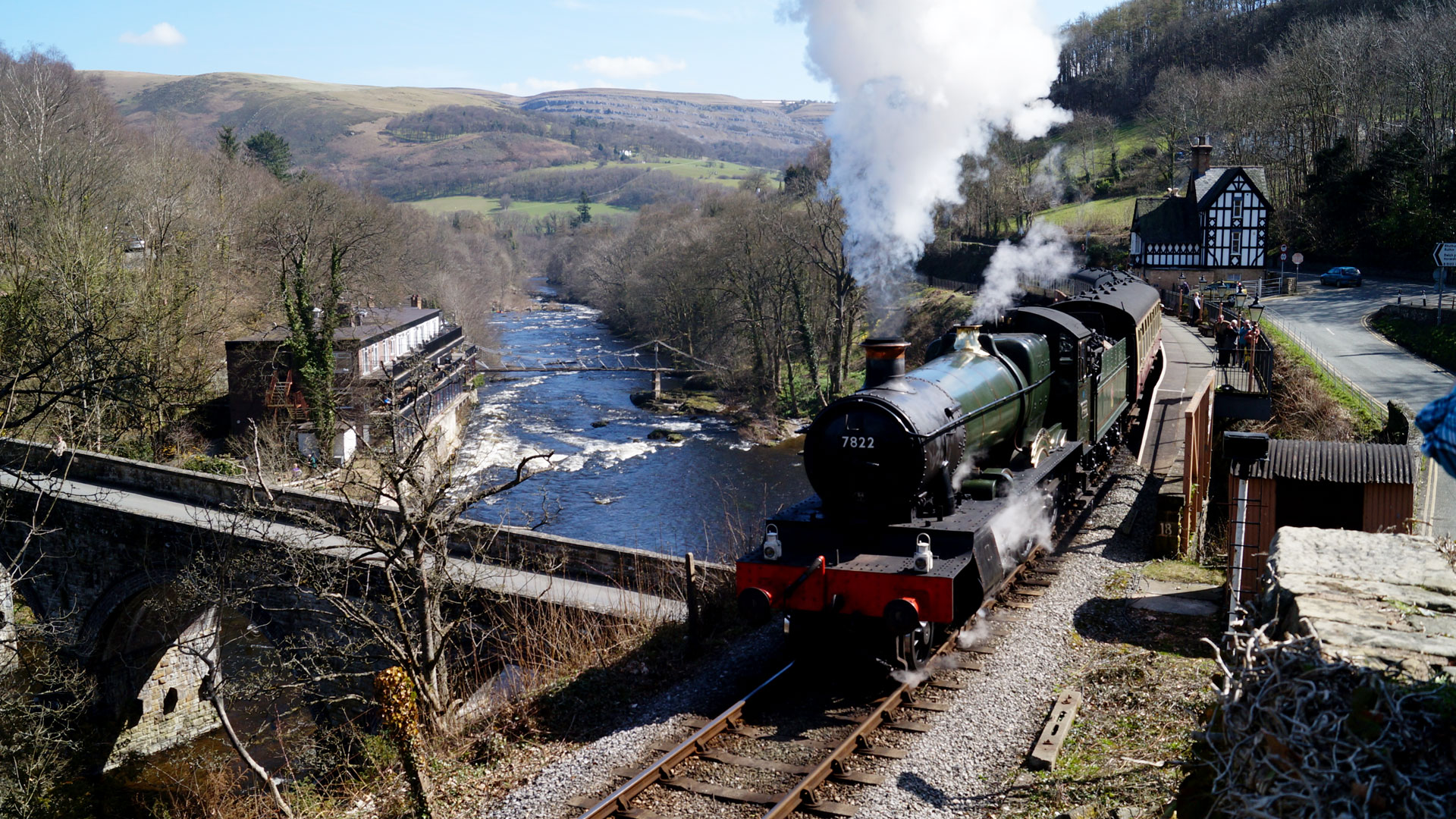 Berwyn Station on the Llangollen Railway

About the Author: Phil Legg