Roy Girling surveys 50 years of a general engineering firm in Somerset – from the 1920s to the 1970s – which helped a University Scientist at the frontiers of optical microscopy and developed a portable respirator for polio victims.

The Willcocks family came to Clevedon, Somerset from Haverhill, Suffolk in 1883 and opened their first shop, making bicycles, in Lime Kiln Lane. They moved from there to Queens Road, and finally to the corner of Old Church Road and Pizey Avenue. Their first workshop on this site was built by the father, George Alexander Willcocks in the 1920s.

There were three sons and each had his own interest. Harry Willcocks, the eldest, was an engineer but he also undertook the administration of the Company. The second brother Gilbert Willcocks was a toolmaker, having served his apprenticeship with White & Poppe Ltd of Coventry, and Michael Willcocks, or “Jack”, as he was known, was the precision engineering specialist.

The Blue Ensign from the boat was retrieved from the lake and now resides in the Clubhouse at the Clevedon Sailing Club, while the windscreen and Seagrave’s seat are in the Jetty Museum in Windermere, having been taken there by Aubrey Willcocks, Jack’s nephew.

The engineering company run by Jack Willcocks in the inter-war years comprised 20 employees who had come from Bristol Aeroplane Company and one of their first jobs was, as might be expected, of a racing nature.

On the corner of Pizey Avenue there was a car race track which hadn’t been used for some time and the associated racing cars were in a somewhat derelict condition but out of them all, they made four or five serviceable units which they were able to use on the track. 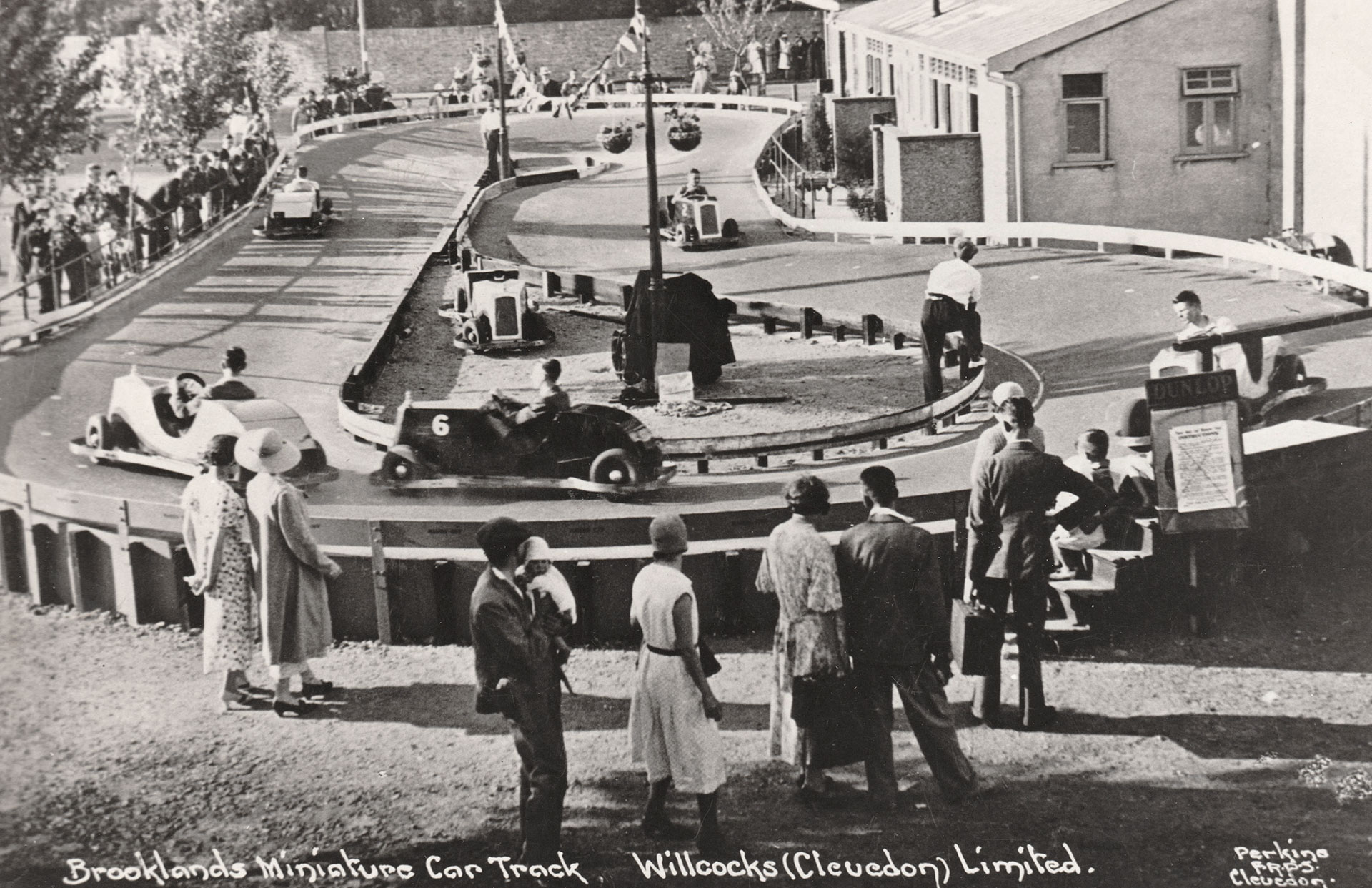 When the war started in 1939, the Company made jigs and tools for use by the armaments factory at Woolwich and this firmly established them as a precision engineering company and resulted in a wide range of jobs requiring individual and inventive expertise.

One item of particular interest was an early type of digital counter in the form of a disc perforated with a pattern of holes. When fixed to a drive shaft it could be scanned with a lamp and detector to give a readout of direction and degree of movement of the shaft. Typical uses were on gun mountings to correlate with a direction finder and on the gyro-compass on aircraft automatic pilot equipment to maintain a given bearing. These and many other similar applications were of vital importance in helping maintain the war effort.

Before the days of the electron microscope, magnification depended upon systems of lens’ and mirrors. In order to achieve high levels of magnification a very high accuracy of grinding and polishing of the optics was necessary. One of the scientists engaged in microscope development, Dr. Cecil Burch FRS of Bristol University, introduced Willcocks Company to the techniques of optical component manufacture and they soon became specialists in the field. One of the designs they manufactured, for cancer research, was Dr. Burch’s reflecting microscope, which gave a fixed magnification of 10,000 times, one of the highest levels reached until the electron microscope.

Another precision instrument they made for the medical fraternity was the microtome, a device for making very thin slices of a pathology sample for viewing under a microscope for diagnostic purposes. 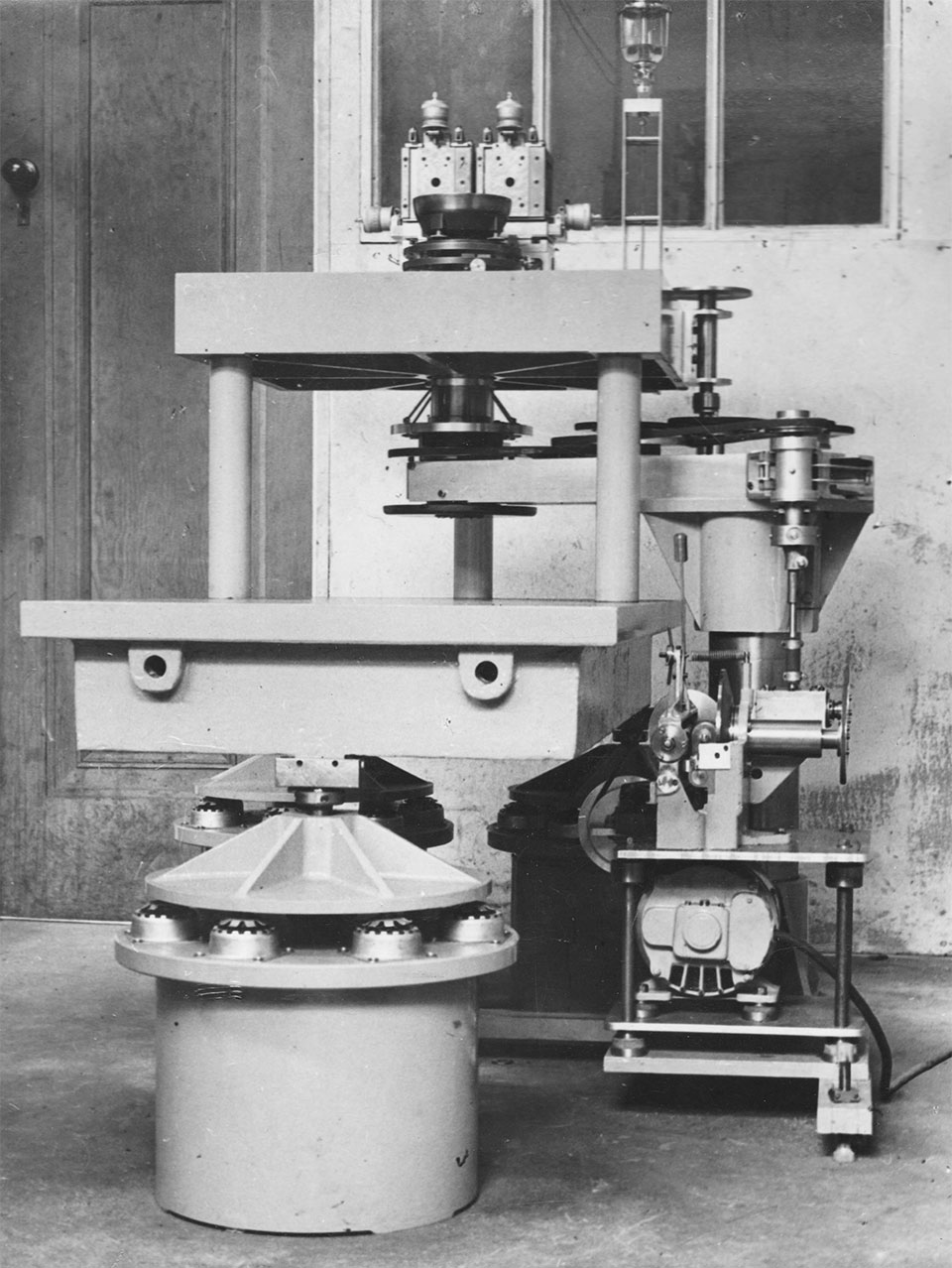 In the early 1950’s Jack’s son Christopher contracted polio myelitis, or infantile paralysis as it used to be called, and was taken to Ham Green Hospital under the care of Dr. James Macrae. An essential item in the care and treatment of polio was the iron lung which provided the necessary effort to expand and contract the patient’s chest when the body’s own muscle power was disabled by the disease.

On visiting his son in the Hospital, he found that an iron lung was a large piece of equipment installed in the hospital and available only to a patient who had been brought there in time.

Jack Willcocks studied the design of the machine and, after a discussion about its application and use with the staff at Ham Green, came back to the workshops in Clevedon and set about designing a more portable and automatic unit which could be made readily available to sufferers who were unable to get to a hospital equipped with an iron lung.

The development was successful and the Company went on to make several units which were used all over the country and abroad during the 1950s when the disease struck down many, mainly young, people before vaccines were developed for immunisation against the virus. The Clevedon Ventilator was the subject of an article in The Lancet of November 1953, (p.972) in which it was described how one patient’s life had been saved by being put into the respirator after failing to respond to treatment in the traditional iron lung. Willcocks was thanked for their “beautiful engineering technique”. 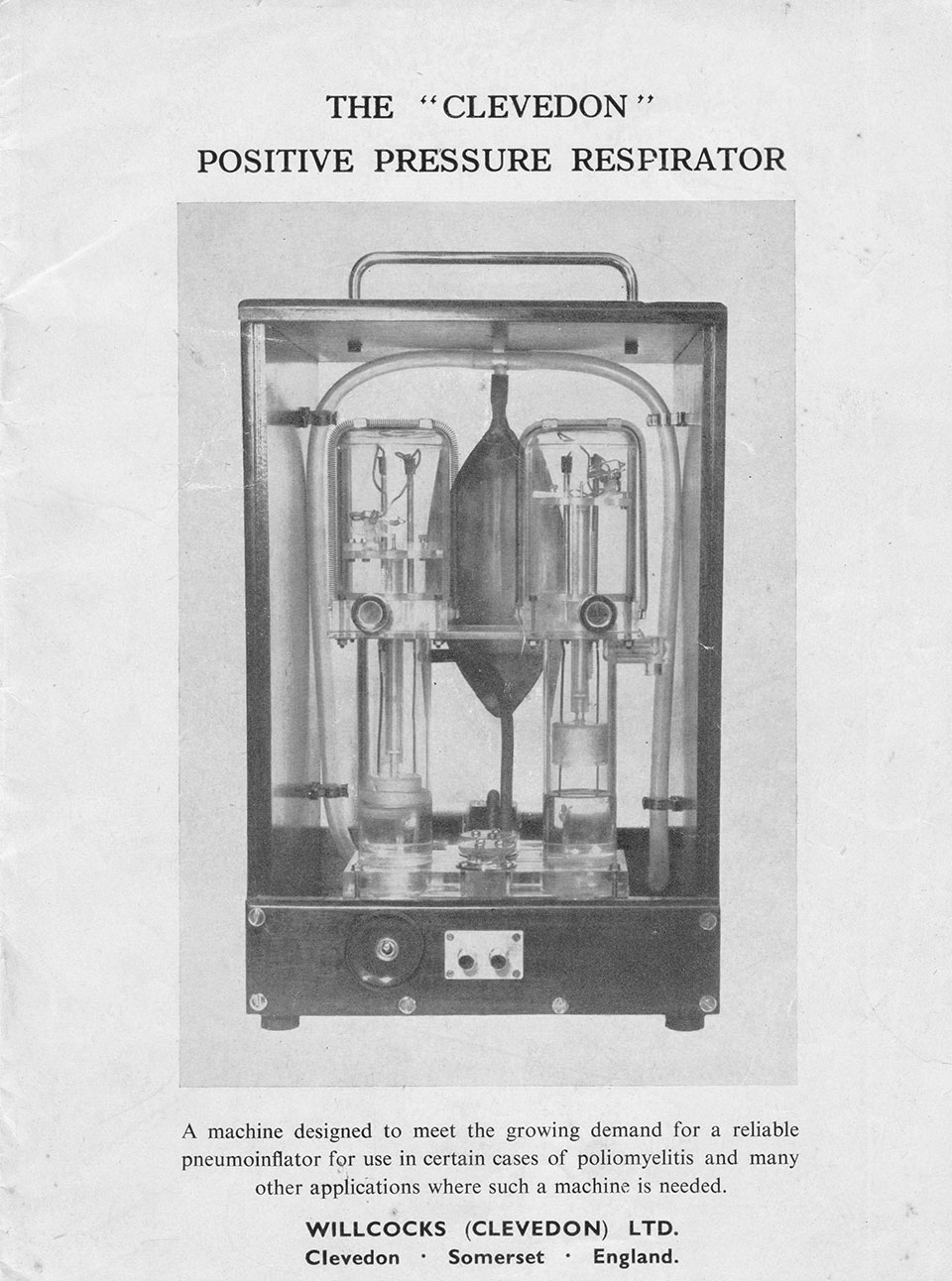 Later in the 1950s a request came for the Company to design and fabricate balloons for high-altitude weather research. This necessitated building a hut with a controlled atmosphere and having a 100 ft. long table on which to lay out the panels of polythene from which the balloons were made. A seam welding machine was made to roll along the table on guide rails to weld the panels together to make balloons as tall as 300 ft. and 12 ft. diameter.

The work went on for about 10 years and the balloons were released from the old airship base at Cardington, in India and in Australia. The test equipment to be carried by the balloons was installed in aluminium spheres made in two halves and bolted together. Some of the larger ones measured as much as 10 feet in diameter and when the balloons were released into the atmosphere they had details attached of whom to contact when the balloon and its instrument sphere came down to earth. On one occasion, in India, attempts were made to find a balloon which was thought to have descended in a particular area but local residents professed complete ignorance of any such event. However, on making a further search around, a local inhabitant was found bathing in a large semi-spherical aluminium bath which he insisted had been in his family for generations! After some persuasion he revealed where the other half of the sphere and the test equipment were hidden!

A tall building was added to the end of the balloon shop to house a press to fabricate helicopter rotor blades from carbon fibre, these having been designed by a Willcocks nephew, Ronald Clemens, making another ‘first’ for Clevedon. 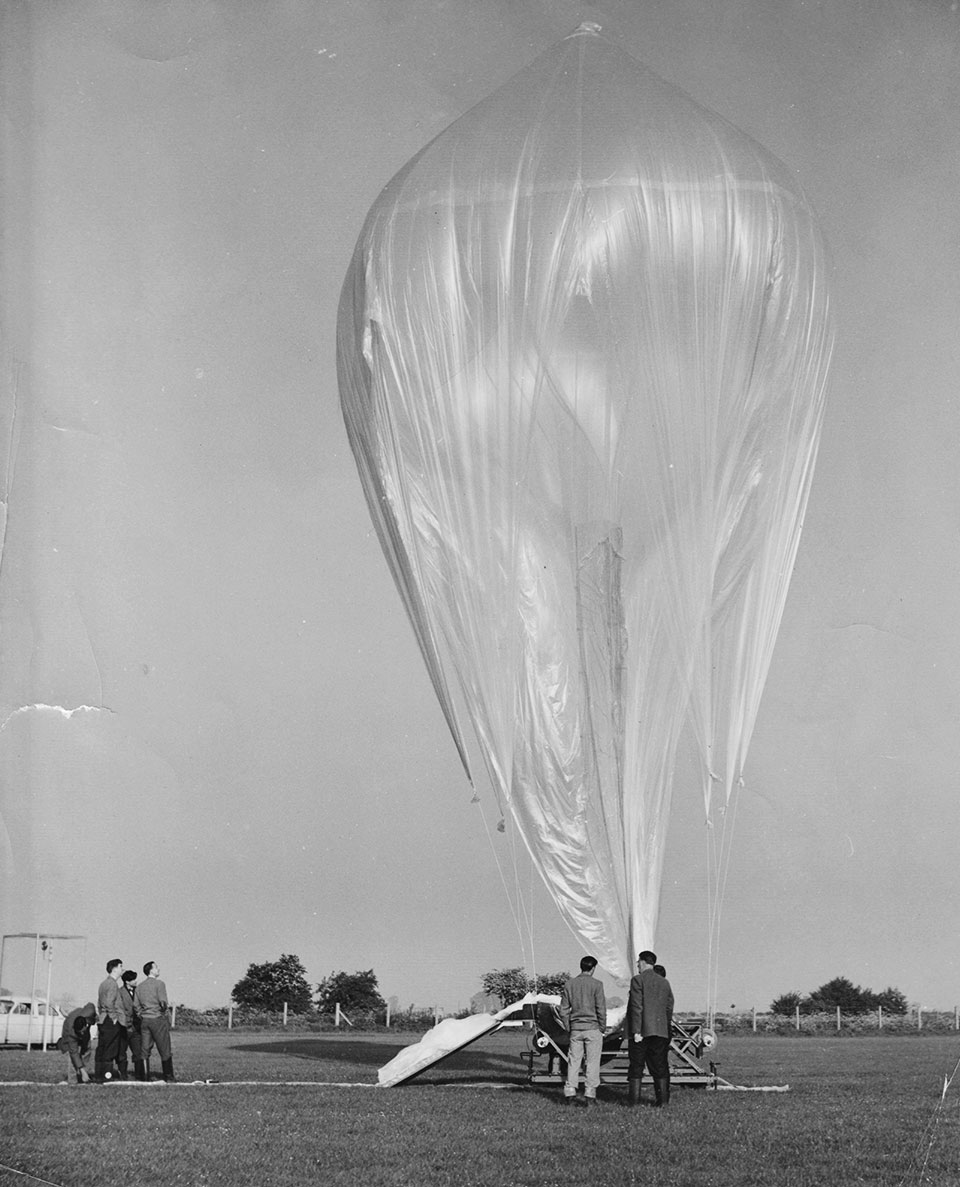 Another problem which the Willcocks Engineering solved in the mid 60s was that of preventing unscrupulous bar tenders from topping up their bottles of spirits with water. They invented a non-reversible bottle top which when crimped onto the bottle by the distillers, allowed the contents to be poured out but prevented anything, like water, from being poured in so maintaining the strength of the brew!

When, in the late 60s, a variety of car engines required 2, 3 or 4 star petrol, Willcocks were asked if they could design a blending pump which would allow the use of one nozzle to dispense any of the desired blends. In the final design, installed at a garage near Windsor, the pump was on an island and the nozzle could be moved round into any of three positions so a car could pull up into an empty space on the island and swing the nozzle round, select the blend and fill up. The next customer, having pulled into another space on the island would swing the pipe to his car and select his blend without having to wait for the previous car to move away. The idea failed because of suspicion by customers as to whether the right blend was being supplied by the one pipe, so the old system continues of a pump and pipe for each different blend.

The Company has been called upon many times to assist with various problems of design and manufacture but perhaps one of the strangest calls for assistance was to house two elephants when the circus ‘big top’ erected on Salthouse Fields was damaged during a storm in 1954/55. Straw was strewn around in the garage and the elephants settled down quite well. Not so was Jack’s son Christopher who was out with friends when the animals had been brought in. When he arrived home later after a convivial evening and opened the door he wondered if he had been too convivial. It was only the fact that the elephants were grey, not pink, that he felt somewhat reassured. 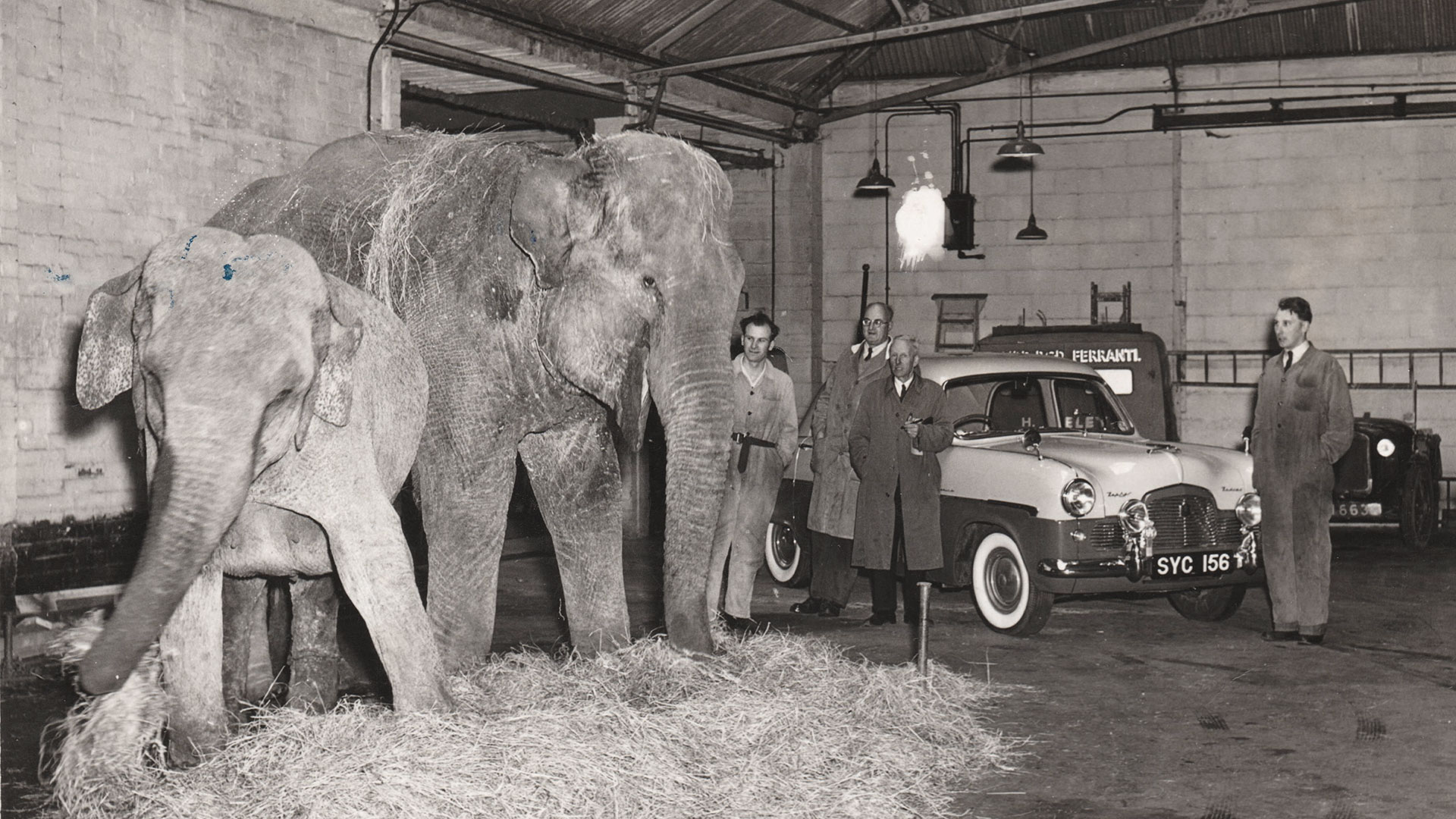 In 1964 a call for engineering assistance came from Sergeant John Durston of the Clevedon Police Force when a schoolboy reported that a flying saucer had landed on Dial Hill! Aubrey Willcocks and Reg Woollard went to investigate, and on trying to move the object to find an opening, the ‘saucer’ started bleeping. They waited to see if any little green men emerged but nothing further happened so they set about opening it up. Inside they found an Exide battery, a loudspeaker and a switch which operated a bleeper when the ‘saucer’ was moved. Reg Woollard commented that all the parts were made in Britain, not Mars, and the liquid which filled the lower part of the fibreglass body was found to be pig-swill!

This was one of five similar objects found on that day in various parts of the country, all part of a great practical joke by members of an apprentice training school ‘somewhere in England’!

Willcocks Engineering Co. have now been part of the Clevedon scene for over 130 years and staff from the Company have gone on to found further engineering companies in the town, so it is likely that similar work will go on well into this current century.

Roy Girling, 1926-2020, was a Fellow of the Institution of Engineering & Technology, formerly Institution of Electrical Engineers, and spent his career in power engineering. He left school aged 16 but trained at evening classes at Stretford Technical School, though this was interrupted when he was called up. After the war he got a job at Metropolitan Vickers in Manchester but later joined the CEGB in Portishead, Somerset. He worked in the laboratory at the power station there before moving to the Bristol office. He spent some years in Canada, first at Nova Scotia Power Station and then in Calgary, where he worked for Montreal Engineering Co, eventually moving back to the firm’s Bristol branch. He was thus well qualified to write the history of one of Clevedon’s most innovative enterprises.

About the Author: Phil Legg